Gono bishwabidyalay is a unique educational institution with some fundamental visions for the development of human resources in order to transform a traditional society into a modern state. Unlike other private Universities, it does not have any private ownership of any individual or corporate body; it is guided by a trustee board. The concept paper of the University visualizes a healthy rural society free from poverty and age-old prejudices accumulated over time immemorial.

The curriculum of the University focuses on a holistic view of life in order to produce broad, liberal, mentally and physically sound young generation of citizen for the new state, the People’s Republic of Bangladesh. The Department of English as an entity has been consistently trying to produce graduates with bilingual competence.

At the same time the entity gives equal emphasis to important historical English authors such as William Shakespeare, Samuel Johnson, George Bernard Shaw, John Milton, William Wordsworth, P.B. Shelly, John Keats, S.T. Coleridge, Francis Bacon and many other English writers of post colonial period. The idea behind the content of the syllabus is to inculcate among the students the spirit of modern mind and European enlightenment.

The Department of English is committed to provide quality education since its inception in 2003. The entity had started with only four students in the first batch. By now the entity has become one of the largest and popular Departments of GB.  The number of students currently is around 500.

The survey has given the Committee an opportunity to look back and evaluate the overall achievement in the context of a University established in rural setting away from the metropolitan city. The committee is grateful to IQAC. The committee has, within the time frame, conducted an opinion survey to assess the quality of higher education provided by the entity. 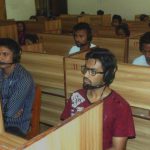